MEPS (International) Ltd. has made an upward revision to its previous prediction for total exports of all finished steel products in 2014. The final figure will be a new record high of, at leas 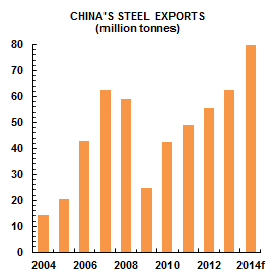 t, 80 million tonnes, and represent the fifth consecutive year of rising sales to the global market. Total reported crude steel output is expected to rise from 783.5 million tonnes in 2013 to 810 million tonnes this year. This would translate into 24 million tonnes of extra supply of finished steel products for sale by the steelmakers in 2014. Just 27 percent (6.5 million tonnes of the increased production of steel) is likely to find its way on to the domestic market this year.With China’s apparent consumption of finished steel, in 2014, expected to be approximately 740 million tonnes, the extra local mill supply will represent less than 1 percent of the total market. It is clear that, by concentrating their sales efforts on exports, the steelmakers have eased some of the pressure which has been developing on the domestic market from oversupply. This exercise has not been a complete success because weakening demand has pushed average selling values down by almost RMB200 per tonne (5 percent) since the start of the year. At the same time, the competitively priced exports from China have contributed to a reduction in domestic prices in many other parts of the world.

The function is under construction, so stay tuned！